I guess I owe Carmen for the wonderful display of talent compiled last night in her honor. As an acquaintance to one of the contributing bands, Fitzgerald’s hosted a birthday bash for her. Adam Rodgers, a native Houstonian who currently resides in Austin, kicked things off right on schedule, my compliments to the venue. Adam has, within the last six months, put together a band called Bantam Lyons. The name derived from a character in the book Ulysses by James Joyce. While recruiting a few individuals to simply lend a hand, Adam instead found something that worked well as a full collaboration. He credits his band mates, not as “aficionado’s of their instruments,” but with the amazing ability for thought and creativity.

The track, “Sweet Melody,” can be found on Adam’s MySpace page. It’s a five piece harmony substituted with a guitar solo when performed live. Adam plans to spend the next few months writing in hopes of drafting 10 new songs to present to his guitarist, Curran Guiney. He foresees his debut album as being largely acoustic with possibly a cello. When asked about his inspirations, Adam mentioned Dave Matthews and Jason Mraz before digging deeper into his appreciation for Motown. He believes that Motown was revolutionary in generating hits and that rock and pop genres would not be present today had Motown not existed. He likes music that constantly evolves and used the band Radiohead as an example. “How can you breakthrough if all you play is the same shit?” he said. Furthermore, he explained that, while The Beatles aided in the understatement of Motown, they did things right by incorporating a variety of musical stylings and by “not letting other people tell them what to write.”

Adam’s motivation for songwriting lies in the recollection of his late father, who made him listen to Marvin Gaye when he was child. Adam’s song “Save Me” is a tribute to his father. “Fuck Me” is a song exhibiting Guiney and his very influential guitar accompaniment. Closing the set, Adam performed a solo cover of Ben Harper’s “I’ll Rise.” He sang it a cappella despite the gentle repeated strum of the bass string.

After a nice conversation with Adam I went back inside the crumbling authentic dive and caught the tail end of Sleeping with Giants. It was a head-banging, lip-pierced, punk montage with a humdrum front man singer. I headed downstairs and, as the laggard observer I had been all night, I again only heard one or two numbers by A Dream Asleep. Furthermore, during that brief time I was distracted by the stage platform coated with band stickers. Just not my cup of tea. What I did like, however, were the low stringers improvised by the lead guitar during the singer’s quirky banters. The singer was having a great time. I’ll give him that. Blood rushed to his face as he screamed his heart out. During the last song he jumped off of the stage and began leaping onto people in the crowd.

It’s rare but it does happen. Another Run’s drummer also serves as the band’s front man. Adrian Grammer has been singing for the band for 4 years. Initially they were looking for a lead singer but Adrian took the bull by the horns, so to speak, when nobody stepped up. He had difficultly describing their sound and responded first by informing me that they “don’t stick to one genre.” Indie rock, blues, soul, jazz, and rock n’ roll can all be found within their original work. Adrian’s personal favorites are Pete Yorn and a band called Ours. As a band they are influenced by Incubus, At The Drive-In, and The Police. Their first record was released in 2006 and was titled No Sleep Tonight. It was self recorded, self produced, and independently released. Their second release (an E.P.) is currently being mixed in New York and will most likely be titled What Happened. Adrian writes the lyrics, the melody, and the drums but the arrangement is done cooperatively with the rest of the band.

They started with great vocal harmonies followed by a song featured on their MySpace page titled “I‘ll Be There.” I was anticipating a horn solo from Bob, the bass player, after waiting out their sound check and watching him warm up to a trumpet. It was incorporated into a track driven by power chords and representative of their harder side. They covered The Killers’ “Midnight Show” at the end of their set and Adrian did a good job of replicating Brandon Flowers’ distinctive voice. If you would like to check them out, their next show will be at Dean’s next Saturday May 16, 2009 at 11pm.

Better Luck from Katy, TX was your typical, mainstream impacted, guitars-worn-at-your-knees, punk band. They invited us to come closer by jokingly making sure we knew that it was alright to bring alcoholic beverages to the stage. 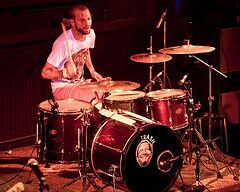 Downstairs I found The 71’s, a band I had seen open for Thriving Ivory at Warehouse Live back in December. I purchased their debut album, We Are Locomotive, and looped it in my car until I discovered my favorite track, “Tomorrow Belongs to You.”  Its funky, slightly distorted introduction preludes a catchy vocal paired with very essential lyrics. “The truth is, honey/ money never seemed that sweet/ When you’re lyin’ on your back/ money don’t get you back on your feet.” These words illustrate the willingness to recognize something that has the power to evoke a figment of happiness while creating a barrier to actual happiness. So, my interpretation of a message would be to identify the things that hold you back and eliminate them in order to obtain true happiness.

You can always expect to hear a cover song from The 71’s, as each performance I’ve seen has included one. It was “Interstate Love Song” by Stone Temple Pilots at Warehouse and last night it was Tears for Fears’ “Everybody Wants to Rule the World.” They implemented a great version complete with its familiar guitar riff, courtesy of Ryan Cecil on the electric.

Keeton Coffman, the front man of The 71’s, approached me after his performance, as I had attempted to get in touch through various social networks including MySpace and Facebook, prior to last night‘s event. From Keeton I learned that the band has received some airtime in Austin. They have been featured on the indie FM station 106.7. In addition, they had three of their songs licensed to preview on the TV reality show, The Real World. Despite these few promotional breaks, Keeton claims that he and his band mates just “aren’t good at the business thing.” We shared our thoughts on the unmanageable amount of resources available online and how keeping up with that is a full time job in itself. The 71’s prefer local gigs to touring and are currently striving to become the best rock/pop band in Houston. “I want our music to matter to Houston because Houston matters to us,” said Keeton. They will be taking some time off this summer to play at youth groups for children. Visit them on MySpace for show dates returning in July. While I did not have the pleasure, you may witness Keeton’s back flip, as he has chosen to display it in the past. A practiced gymnast, Keeton coaches on the side.

Rachel is the front woman to an otherwise all male group. The Vettes is a fitting name for this group, as each member is a Vette. To clarify, they are all related and their last name is Vette. Rachel and her four brothers reside in Louisiana and have been on tour through Texas and surrounding states for the last several months. Rachel has great stage presence and the pipes to make it legit. Sheathed in bangle bracelets to her elbows, stilettos, and a plethora of necklaces she strut the stage with such riveting energy that I had to remind myself to pay attention to the other components of the group. With her glitter embossed microphone stand in tow she struck a number of suggestive poses and entertained animated facial expressions and lyric-echoed gestures. With her apparent 80’s influences, Rachel enjoys Depeshe Mode and Duran Duran. The Vettes have been compared to Blondie but Rachel ensured me that they found their sound prior to exploring any of the bands they resemble. The available E.P. is titled T.V EP and contains five tracks. I guess the summer season fuels creativity because, like Adam Rodgers and The 71’s, The Vettes will be taking most of June and July off from touring to do some song-writing.