I don’t usually write about books but I think that this is a place where I should share whatever it is that I have fallen in love with. That said, I am in love with a book by David Gilmour called The Film Club recommended by the SoGoPro book club.

I thought I would learn a little bit about old movies from a former film critic from the CBC news show, The Journal. I did. However, I was extra moved by something I’m not sure even Gilmour knows may be admired. That is, I think I was just given a manual in the form of a written memoir for the kind of parent I want to be. Gilmore was never nosey or invasive but always there when needed. It started when he allowed his son Jesse to drop out of high school so long as he agreed not to take drugs and to watch three movies a week with his father. For three years the two of them explored film in lesson units created by Gilmour (Buried Treasures, Overrated Films, Guilty Pleasures, etc., etc.).

Gilmour knew he was taking a risk. He knew that he could have been setting his son up for failure. I found the exact moment in the book when some of his worries were relieved and for the first time he thinks his son may be ok in the world. It is when Jesse corrects him on the cinematographer on a film called Stardust, and follows it up with an opinion on Fassbinder (a German movie director) flicks in general. Gilmour says, “I stared at him until he looked up. ‘What?’ he said. Knowing perfectly well ‘what’.” 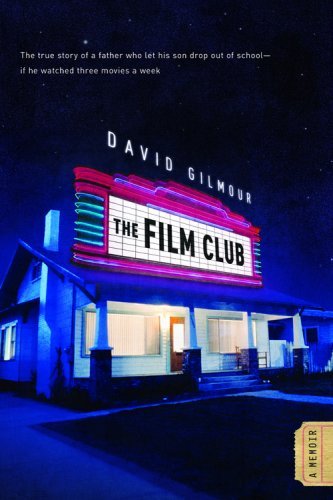