I blogged about this song way back in March when I saw her at SXSW. This official video was available a few months after but I never posted it. Today, I was listening to the album, A Good Day, and felt like adding it. Check out the looping! 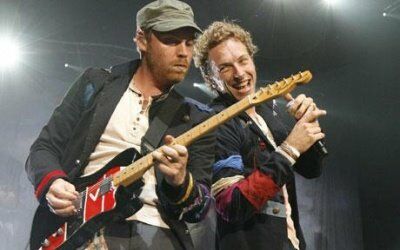 According to The Daily Cougar (The Official University Newspaper of the University of Houston) journalist, Cassandra Malork, “A Coldplay concert is always a memorable one because excellence is expected.” Last night was my first live Coldplay experience but it is safe to say that I can agree with Ms. Malork.

After Aimee, my partner in crime, and I purchased our tour T of choice (In Aimee’s case, a sweatshirt that said ‘COLDPLAY’ across the ass) we climbed to the ‘cheap seat’ section. Nose bleeds or a lawn seat is all the money I ever throw down. In all honesty the seats were pretty good. We sat directly to the side of the stage which was cool as the show opened because we saw the band jamming to “Life In Technicolor” before they lifted the curtain for the crowd to react. Chris Martin was, of course, wearing the new distinctive tour jacket, the one specifically made for the ‘2008 Viva La Vida Tour,’ also the one we saw him in on the cover of SPIN magazine when the album came out.

Starting with an extended instrumental is awesome as it is and the fact that “Life In Technicolor” is the first song on the new album made it even more dramatic. It’s like you just popped in the CD, but no you are listening live!! Ok sorry, I’ll get on with it. The segue into “Violet Hill” was not surprisingly followed by a burst of applause as the rest of the crowd was exposed to what we saw behind the curtain. Next was “Clocks” which had the lights down for every piano segment. The green lasers were funny. You’re not really affected the same way by the lighting when you’re above the lights. I knew we would miss some of the visuals anyway considering we were to the side and couldn’t see what was behind the band. There was, however, several suspended screens and excellent live filming going on which I hope will be released on some kind of DVD. Aimee kept filming the film (lol…sounds redundant) with her camera so I will post live videos once I steal them from her.

“Speed of Sound” played through entirely with the lights down. At this point it was time for some kind of acknowledgement to the crown so Martin said, “Let’s turn some lights on here man, can’t come to Houston, Texas without turning on the lights and sayin’ thank you for having us.” “Speed of Sound” was followed by several Viva songs, including one of my favorites, “42.” Viva is different than the rest. Less lyrics and more sound. They use strings and percussion. It’s really beautiful. A Rush of Blood to the Head has always been my favorite but Viva La Vida or Death and All His Friends may be sneaking up to the number one slot in my mind.

If you listen to the lyrics on Viva you hear the usual life, love, and politics in the familiar Coldplay sound, however, in this album, as the title suggests, there is also death. It’s sad. The song “42” says, ‘Those who are dead are not dead/ They’re just living in my head.’ Just the name of the second track, “Cemetaries Of London,” alludes to death. They also get religious with this forth album. “Viva La Vida,” says, ‘I know St. Peter won’t call my name.’ We were supposed to hear less self-consumed stories in this album but I think “Viva La Vida” is completely personal. I gather that he is reflecting on quick fame and the fact that once it’s there it’s there forever. He will always be famous and now he wants to search beyond fame to see what is next for him. What happens after life and after the love that he has been lucky to secure? He is unsure of what will come or if he is on the path to where he thinks he wants to be when the next thing comes. He does all this via biblical references, which gives it a kind of double meaning. Those who take the time to meditate on the lyrics will find the personal message because it lives under the simple lyrics. Let’s hear your thoughts?

On “God Put a Smile Upon Your Face” I noticed that Jonny’s guitar had the black and red V[I]VA logo painted on it. Next, Martin started a solo of “The Hardest Part” and then looked in the crowd and found a young kid and said to him/her, “Well, how old are you? About four?” He then mentioned something about appreciating the diversity of the crowd which, if you have read the Houston Chronicle aftermath of the concert, writer Brandon Hernsberger makes a good point regarding this comment. He says that Martin misinterprets age difference as diversity and that the crowd last night was the least diverse he has seen. I said it was a good observation, I didn’t say I gave a shit. I couldn’t care less if the crowd is diverse. Plus the next comment Hernsberger makes is ridiculous and I don’t agree with it at all. He says, “Coldplay appeals only to a certain group of people – those who are privileged enough to not have to make personal connections to art to help them define their position in the world…” Why would Coldplay only apply to those people? Don’t bother to read the article if you haven’t already. It would make any star struck person who, after last night, is momentarily in love with Chris Martin and jealous of Gwenith a little bit defensive and mad at Mr. Hernsberger.

On “Viva La Vida” we all joined in to the Whoa Oooh Ooooh Oooh Ooooh…of course. Then the music cut so that Martin could sing the Whoaaa with a purposely bad vocal so that we could all laugh at him and love him even more because now we think that he is also funny. Then he proceeded to lay on the stage to bask in his fame for a minute because he still enjoys that even though we know now that he is, you know, searching for what comes next.

They climbed half way up the arena to met the guitars that were there waiting for them and sang “The Scientist.” Martin mentioned that we were the strongest bunch of tacklers that they have had as they do the climb every show. And that it posed a problem because he and his band mates aren’t the strongest of guys. Then he had to mention something about good looks compensating for the lack of strength. It was just one of those friendly banters that you know he says to every crowd. Martin played the harmonica. Then they did “Death Will Never Conquer” and Will, the drummer, sang.

A techno mixed version of “Viva La Vida” played while they made their way back to the main stage to play “Politik.” When the encore came they did the predicted “Yellow” and left the stage with a simple “Bye!” from Martin. Lastly, when track ten on Viva doesn’t end and if you wait a minute you find that it starts up again just like “Reign of Love” and “Chinese Sleep Chant;” that song is called “The Escapist.” That song was played for the exitlude. All in all, it was a great show. An experience I will one day tell my children about. Stay tuned for Aimee’s live footage…

And now I will leave you with the latest video “Lovers in Japan.” By the way, the old school TV looking contraption that magnifies Martin’s hands as he plays the piano in this video, they brought that on-stage with them. And yes, the confetti did fall during this song at the show! Too bad I wasn’t anywhere near the line of fire. I wanted a piece of Coldplay-confetti for my scrapbook! Okay, I sound obsessed. I guess I won’t deny it.

The English singer-songwriter Dido has a third studio album called Safe Trip Home officially being released next Tuesday, November 18, 2008. I happened to catch this lead single on the fourth episode of the new 90210 spin-off.

Hey there! Sorry for being gone so long. I realize that my last post was on November 3rd. Today I want to introduce you to the two-piece Nizlopi based in the UK. When I created my Ray Lamontagne station on Pandora I heard these guys several times. Turns out they had an album in 2004 and an EP in 2006. Now they have their second full-length that came out March 31, 2008 titled, Make It Happen. I have a little animated vidoe for ya of the first single, “Start Beginning.”

And here is the UK chart topper from 2004, “JCB.” This one IS the official video and is still an animation.

I have nothing really grandious to say today. I just love this song. It’s the first single from Rogue Wave’s third album, Asleep at Heaven’s Gate. It’s over a year old now but I heard it this morning and thought, ‘I should post that.’ So, I did. It was also in that Zune music players commercial. Enjoy.